It’s nearly impossible to scroll through Facebook without seeing ads these days. But things may change in the next few years, as advertising methods continue to adapt and react to the influx of technology. In a study of CPMs on Facebook, Adstage has concluded that Facebook has seen a 171% raise in price in 2017.

Adstage broke their findings down into four basic points.

There are a reported five million advertisers on Facebook (as of April 2017), but this isn’t anywhere close to the 65 million active businesses. In fact, it’s only 8% of the total businesses on Facebook right now that are even using ads. So more are coming, and they’re coming quickly.

Advertisers have begun to implement Facebook for ad campaigns, are now truly realizing the full potential that’s available. They’re allocating more towards Facebook into their budgets, but this means less ad spots and more competition. 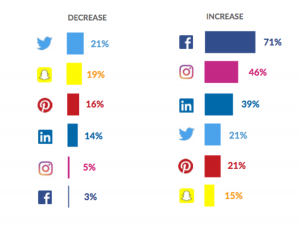 The paid ad impression growth on Facebook slowed down to 19% from previous studies, which found it at 32% and 49%. The Street’s Eric Jhonsa reported on this, saying “Slower ad supply growth is naturally boosting prices. But given that supply is still growing (albeit at a slower rate), it’s also clear that strong ad ROIs — made possible by Facebook’s powerful and steadily improving targeting abilities — are motivating marketers to pay more for ad impressions and clicks. A growing mix of video ad sales might also be helping, given that video ads tend to carry relatively high prices.”

With so much changing, it’s hard to know what to do. First of all, we’ve already seen a flatline, and sometimes even a decrease, in return on CTRs after investing on CPMs and CPCs. More than likely, smaller budgets won’t be able to keep up with the rising prices and they won’t be able to compete.

That’s why it’s more important than ever to have a word-of-mouth organic reach strategy. Active social media employees are on the rise and strategically leveraging the people on your team as social proof to spread your brand message will not only increase your chances of being heard and trusted online, but it will also decrease money spent on Facebook advertising.